by Mufeed Kadri
(The Guardian, UK) —The Bollywood star Rhea Chakraborty has been arrested and held in custody for allegedly supplying drugs to her boyfriend, Sushant Singh Rajput, an actor whose recent suicide has been the subject of intense media scrutiny in India. Rajput, 34, who had starred in several Bollywood blockbusters, was found dead at his Mumbai apartment in…

(The Guardian, UK) —The Bollywood star Rhea Chakraborty has been arrested and held in custody for allegedly supplying drugs to her boyfriend, Sushant Singh Rajput, an actor whose recent suicide has been the subject of intense media scrutiny in India.

Rajput, 34, who had starred in several Bollywood blockbusters, was found dead at his Mumbai apartment in June. Police confirmed he had taken his own life.

The case began to balloon into a media scandal after Rajput’s family registered a police complaint against Chakraborty, accusing her of abetment to suicide by harassing him and stealing his money. She strongly denied the allegations.

Rajput’s family also disputed reports that he had suffered from depression.

Public and political pressure mounted for police to further investigate the circumstances around Rajput’s suicide. India’s top anti-crime agency, the Central Bureau of Investigation, began examining his death in August and the Narcotics Control Bureau (NCB) opened an investigation into his alleged use of cannabis.

The NCB summoned Chakraborty for questioning on Sunday and then again on Monday over allegations she had procured cannabis for her boyfriend. She was arrested on Tuesday and on Wednesday morning moved to a women’s jail in Mumbai. The courts will hear her application for bail on Thursday.

Chakraborty’s brother Showik and Rajput’s former house manager Samuel Miranda were also arrested by the NCB last week as part of the same investigation. Though charges have not been made public, it is reported they are all accused of supplying and financing cannabis for Rajput, and being part of an “active drugs syndicate”.

Chakraborty has been the subject of intense media scrutiny and criticism since Rajput’s death, with accusations that she was a “manipulative woman” and a “gold-digger” who “drove him to suicide”. A media scrum gathered outside her house for days, and she was mobbed as she arrived at the police station for questioning.

Chakraborty approached the supreme court to ask for redress for an “unfair media trial” and had also appealed to the home minister, Amit Shah, that there was a fair and unbiased investigation into Rajput’s death.

As she arrived at the NCB office on Tuesday, Chakraborty also pointedly wore a shirt bearing the words “roses are red, violets are blue, let’s smash the patriarchy, me and you”, in apparent defiance of the misogyny that has been directed at her. 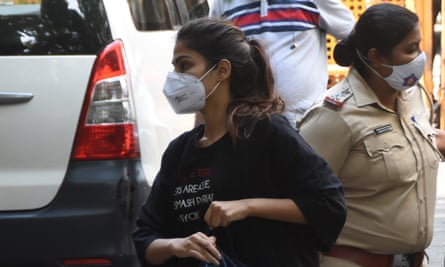 Fellow Bollywood actors spoke out to condemn Chakraborty’s treatment by the media. Taapsee Pannu tweeted: “These people have lynched a human being of her right to live even before being proven guilty.”

Vidya Balan criticised how Rajput’s death had been made into a “media circus”. “My heart breaks at the vilification of Rhea Chakraborty,” she said. “Isn’t it supposed to be innocent until proven guilty, or is it now guilty until proven innocent?”

A statement by the Producers Guild of India said: “The tragic death of a young star has been used by some as a tool to defame and slander the film industry and its members.”